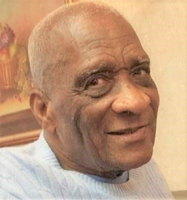 Constantine Williams affectionately known as Willie, age 91, passed away peacefully on Wednesday, March 17, 2021 at Teaneck Nursing Center in Teaneck, NJ. He was a resident of Teaneck for 34 years and retired from the Teaneck Board of Education in 2006 and was also a member of True Witness Church of Jesus Christ in Paterson, NJ. Constantine was a tailor by trade in his native Jamaica before migrating to the United States and was known in and around his neighborhood for his needlework. If he wasn't at his sewing machine, you could find him outside whistling while tending to his lawn and garden. Constantine was an enthusiastic wrestling fan and looked forward to his weekly Thursday night matches with his grands or great grands. His witty personality and warm smile will be missed by all who knew him. He was the loving husband to Velma Williams and they were blessed to have shared 51 beautiful years together. He was predeceased by his parents Albert & Hilda Williams, two older sisters Icylda Roberts and Veronica Bonner, son Garfield, and granddaughter Chanel. He leaves behind 7 children: Charmaine, Barrington, Althea, Marilyn, Lance, Michael, and Vivienne; 21 Grandchildren: Rhea, Troy, Mogens Jr., Jade-Noelle, Lance Jr., Leneil, Chelece, Ebony, Shelby, Schanel, Anthony Jr., Jermaine, Jessica, Errol, Crystal, Peyton, Alicia, CJ, Alice, Alexia, and Camille; 20 Great-grandchildren: Anaiyah, Samiyah, Nyla, Zariah, Leah, Liam, Lena, Logan, Lenox, Jermani, Jemini, Tonii, Tori, Logan, Austin Jr., Roy Jr., Chase, Cody, Ravi, and Layne. He also leaves behind beloved friends, co-workers, and extended family. The viewing/visitation will be held from 5-7pm on Wednesday, March 31, 2021 at The G. Thomas Gentile Funeral Home, 397 Union Street, Hackensack, NJ followed by the funeral service from 7pm to 9pm.