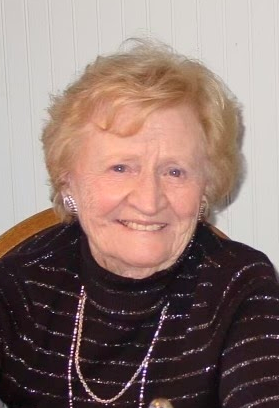 Please share a memory of Christine to include in a keepsake book for family and friends.
View Tribute Book
Beloved mother and cherished grandmother and great-grandmother Christine Lichatin (nee Smith), a longtime resident of Hackensack, passed away peacefully at her home on August 3, 2021. Christine was 100 years old and loved as a mother, grandmother, great-grandmother, aunt, and friend. Christine was born to John and Anne Smith in Wyckoff Township in 1920 and was raised in Ridgewood, NJ where she graduated from Ridgewood High School. She was married to Steve Lichatin, and together they lived in a house he built for her and their two sons, Stephen III and Kevin, in Hackensack. Christine was predeceased by her husband Steve, a lifelong resident of Hackensack, her son Stephen Lichatin III, her daughter-in-law Susan Mueller Lichatin, and her brothers - John, Orrie, Harris, Robert, and her sister Anna (Lomie) Smith Hopper. She is survived by her son Kevin of Long Valley and his wife Rosanne, her grandchildren Eric Lichatin and his wife Elizabeth Prescott of Rhode Island, Ashley Lichatin Bohner and her husband Cory of Morristown, and Jacquelyn Lichatin Koch and her husband Brad of Long Valley. She was the proud great grandmother of Charlotte Roma and Cora Christine Lichatin. Christine was called "Dearie" as a child and affectionately became known as Aunt "Dit" to her many nieces and nephews. Christine also leaves behind many friends and neighbors whom she considered family, especially Rob, Helen, Catherine, and Caroline Burgos who were always there to lend a helping hand. She was formerly employed by New Jersey Bell in both Ridgewood and Hackensack, and later worked for the City of Hackensack as a receptionist and then for the tax assessor's office. After retiring from her work at City Hall, Christine volunteered at the Hackensack Hospital Auxiliary Gift Shop and helped to coordinate various fundraising events. During the many years she stayed home to raise her two sons she volunteered in the Hackensack School system for various events and served on the PTA. She recently celebrated "100 Years Loved" with her family and friends and reminisced about her long, happy, and fulfilled life. She recalled some of her most precious moments including a two month trip across the country with her husband Steve and their two young sons visiting several national parks while making their way to California and the west coast and their yearly two week summer vacations on Cape Cod. She loved Sunday pot roast dinners, taking walks with her husband Steve and their dog Fritzle, dancing, spending time with her neighborhood friends in Hackensack and visits with her grandpuppies Luna, Archie, and Noodle. But her most precious memories are of the many Thanksgiving and Christmas holidays she celebrated with her family, and most especially, spending time with her three grandchildren and two great-granddaughters. She was "one hundred years loved" and blessed with so many special memories.

Share Your Memory of
Christine
Upload Your Memory View All Memories
Be the first to upload a memory!
Share A Memory
Plant a Tree