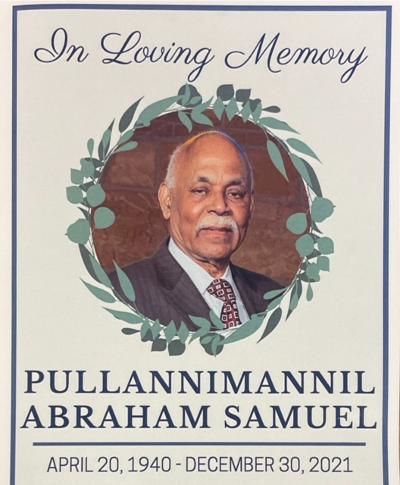 Obituary of Pullannimannil A. Samuel

Please share a memory of Pullannimannil to include in a keepsake book for family and friends.
View Tribute Book
P.A. Samuel ("Samuelachayen") was called home to be with the Lord on December 30, 2021. He was born to Thomas Abraham and Saramma Abraham in Pullannimannil house, Karikulum, Ranni, Kerala, India. He was the youngest of four children. His only living sibling is Annamma Samuel (Texas/Kerala). He attende St. Thomas High School in Ranni. He was raised in the Pentecostal Faith, was a great worshiper and preacher from a young age and attended Valiyakavu IPC Church in Ranni. After graduating high school, he obtained a diploma in stenography, and moved to North India to start working. He lived in Bhopal, then Korba, and worked at the India Bureau of Mines (later known as National Coal Development Corporation). In June 1968, he married Pennamma Samuel. They were blessed with two daughters while in Dehi, India. He moved to the United States in 1974 and was blessed with a third daughter a few years later. He was an office administrator at the United Nations for over 20 years until his retirement. While in Delhi, he actively participated in spiritual fellowship at V-10 Green Park IPC church, where the late Pastor K. T. Thomas was ministering. He was exemplary in evangelism and used to bring many souls to the Lord during open-air meetings in a place called Daula Kuwa, UP, India. He sang hymns in Hindi, saying "Jesus Christ is knocking at the door of your heart, open up and receive Jesus Christ" and would go around encouraging people to open their hearts to the Lord. He was part of a group of believers in Delhi, with whom he stayed in touch after immigrating to the U.S. They said his "soft and gentle approach to the reality of life's storms" was a demonstrable faith in God and an example to everyone in Delhi. Samuelachayan was known as a church planter and started churches wherever he lived. When he moved to the U.S., he attended the UN church while living in upper Manhattan. After moving to New Jersey, he played a pivotal role in the formation of the India Christian Assembly of NJ and worked with his late wife and other founding members to start the church in 1987 with just a few families. He conducted services until Professor T.C. Mathew was appointed as the Pastor. His deep and solid spiritual life made him a faith warrior and guide to living out faith with confidence in many ways. After retiring, in addition to his active church life, Samuelachayan spent many years with his wife taking care of each of their eight grandchildren. For all those who knew him, he will remain in our memories for his boisterous personality, enthusiastic manner and love for everyone he met. He is fondly remembered and loved by his children- Susan George and her husband James, Sophia Lipman and her husband Brian, Sonya Kiesel and her husband John-Paul, and grandchildren- Aidan, Devin, Ryan, Maya, Joshua, Noah, Kirin, and Helena.
Friday
7
January

Share Your Memory of
Pullannimannil
Upload Your Memory View All Memories
Be the first to upload a memory!
Share A Memory
Plant a Tree