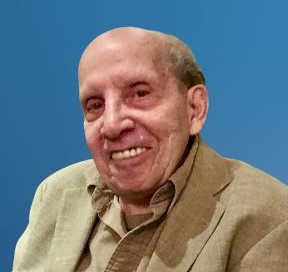 Please share a memory of William to include in a keepsake book for family and friends.
View Tribute Book
William Gerard Carriero, known to his friends and family as Bill, age 92, of Hackensack, New Jersey, transitioned on the evening of Saturday, October 15, 2022 at home with his wife of 38 years, Damaris Ciprian Carriero, by his side. Bill was born on January 14, 1930 in Newark, NJ, to Joseph F. Carriero and Mary Jane Radice. He attended St. Benedict's Preparatory School in Newark and Seton Hall University, where he earned a baccalaureate in Chemistry. Bill entered the military as a USN corpsman and served during the Korean War from 1950-1953 as a combat medic for the Marines. He spent much of his professional life in the research of precious metal refinement at Engelhard Corporation in NJ, and remained active in the field for many years after retirement. Bill was a deeply committed fan of the New York Yankees and the New York Giants. He was an avid collector of stamps, coins, and trains, and was a lover of fine red wine. Bill is survived by his wife Damaris, his daughters Lisa and Lynda and son-in-law Kris, his sister Patricia and brother-in-law Donald, niece Donna and nephew Chris, nieces Cristina and Toni, mother-in-law Cristina Garcia, sister-in-law and brother-in-law Ingrid and Kevin, as well as extended family, former colleagues, and friends. Bill is preceded in death by his parents, Joseph and Mary Jane, sister Theresa, and niece and nephew Joanne and Scott. The funeral service will be held at Holy Trinity Roman Catholic Church, 34 Maple Avenue, Hackensack, NJ 07601, at 11:00 AM on Monday, October 24, 2022. Burial will follow the funeral service at 1:00 PM at St. Raymond's Cemetery, 2600 Lafayette Ave, Bronx, NY 10465. Family and friends may donate in memory of Bill to charities close to his heart, the Lupus Research Alliance at www.lupusresearch.org and St. Jude Children's Research Hospital at www.stjude.org.
Monday
24
October

Share Your Memory of
William
Upload Your Memory View All Memories
Be the first to upload a memory!
Share A Memory
Plant a Tree