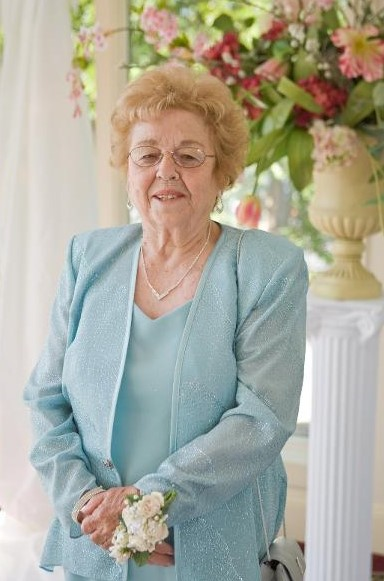 Please share a memory of Odette to include in a keepsake book for family and friends.
View Tribute Book
Our loving mother Odette Mascetti was born in a small village in France, on November 24, 1925. After completing high school, she became a domestic worker performing household services for many families, which included cleaning, cooking, tending livestock and care for children. In her life, Odette has seen the world change. She lived through World War II and did what most of us will never have to endure, living under a military occupation by a foreign country. She also lived through the Space Race, the invention of the internet, and the turn of the century. Shortly after World War II, Odette fell in love and married our father, Pierre Mascetti. In 1955, with the sponsorship from our Uncle Charlie (Uncle Charlie was the man who Odette's sister Simone fell in love with when he was fighting for the American forces that liberated their village from the Axis powers), Pierre brought his wife Odette and their first child to the United States of America. Soon after Odette brought three more children into this world, the last in 1960. Odette was all about hard work and dedication to her family. She worked long hours including the night shift in a yarn factory. She eventually became the Head Cook at Paramus High school, where she worked for thirty years. We were never wanting for anything, and we were never disappointed on Christmas morning, and she was generous to all. Odette had a long life filled with lots of love and devotion to her family until the age of ninety-six. She joins in heaven her husband Pierre, her first son Regis Mascetti who passed away shortly after birth, her parents Marie Louise and Marcel Remy, her granddaughter Diane, beloved daughter of Andree and Mauro Bacolo, and her sister Simone Shields and Simone's husband, our Uncle Charlie. We cannot forget Uncle Claud Mascetti, Pierre's brother, and her nephew Michael Shields. She is survived by her brother Denis Remy and his wife Karen, her sister Yvonne Peoples and her husband Frederic, her four children Claude Potter, Pascaline Swain and her husband Lawrence, Andree Bacolo and her husband Mauro, and Jean-Pierre Mascetti and his wife Iris. In her life Odette has been blessed with numerous grandchildren and great grandchildren who she loved greatly; Her grandchildren include Jeanette DeGennaro, Shannon Potter, Laura Rehbein, Diane Vigilanti, David Bacolo, Samantha Mascetti, Nicole Mascetti, Kassandra Swain, Stephanie Swain, Christopher Mascetti, and Pierre Mascetti. The great grandchildren include Claudia DeGennaro, Vincent DeGennaro, Sophia Rehbein, Ella Rehbein, Nevaeh Laing, Zoe Laing, Carter Potter, Sean Potter, Mikaela Potter, Brody Vigilanti, Claire Vigilanti, Joshua Bacolo, and Liliana Bacolo. Odette was fortunate to have two sisters and a brother that brought her numerous nieces, nephews, grandnieces, and grandnephews too numerous to list, but she loved them all. The Funeral will begin on Friday, October 28, at 8:45 AM from the G. Thomas Gentile Funeral Home, 397 Union Street, Hackensack. The Mass of Christian Burial will be celebrated 10:00 AM at Holy Trinity R.C. Church, 34 Maple Avenue, Hackensack, with burial following at George Washington Memorial Park Cemetery, Paramus. The family will receive friends on Thursday from 4:00 – 8:00 PM for visitation at the funeral home. In lieu of flowers please make a donation in Odette's memory to your favorite charity, thank you. To send condolences, directions, or for further information visit www.gentilefuneralservice.com

Share Your Memory of
Odette
Upload Your Memory View All Memories
Be the first to upload a memory!
Share A Memory
Plant a Tree